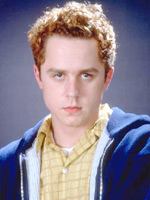 
:: ประวัติย่อ :: Giovanni Ribisi began acting at the age of nine and was a familiar presence on television before making the move to the big screen. Billed early in his career as Vonni, the pale, sleepy-eyed, baby-faced blond gave his first notable performance on a 1985 two-part episode of "Highway to Heaven" playing a boy stricken with cancer. From 1987 to 1990, the young actor could be seen in a recurring role on NBC's "My Two Dads" playing Cory Kupkus, the boyfriend of Staci Keanan's paternally confused Nicole Bradford. Ribisi joined the cast of "Davis Rules" for the 1991-1992 season, and was featured the next season in a recurring role on "The Wonder Years" (both ABC). He followed this up with a regular role on the short-lived sitcom "Family Album" (CBS, 1993).

Ribisi's most significant television work may have been in guest roles, like his impressive 1995 performances on "Chicago Hope" (CBS) and "The X-Files" (Fox). These marked his transition from boy-next-door to more demanding troubled characters. In "Chicago Hope", the actor gave a powerful and disturbing performance as a skinhead in need of a heart transplant who learns that his only hope lies with a non-white organ donor. Equally memorable was his work on "The X-Files" (Fox); as Darren Oswald, a weird teenager that receives electric powers after being struck by lightning, Ribisi showed his strength at making a bizarre character sympathetic. He joined the cast of NBC's "Friends" in 1996 in a recurring role as Phoebe's obtuse yet oddly endearing brother Frank Junior.

1996 saw Ribisi turning a career corner when he made his film debut playing the injured and ousted drummer of The Wonders (of one-hit fame) in Tom Hanks' music-themed comedy "That Thing You Do!" He followed with a starring role in Richard Linklater's film adaptation of Eric Bogosian's play "subUrbia" (1997), playing Jeff, a sensitive and disenchanted youth. That same year, he also acted small roles in "Lost Highway" and "The Postman". In 1998 the actor starred opposite Natasha Gregson Wagner in the dark teen romance "First Love, Last Rites" and appeared alongside Tom Hanks in "Saving Private Ryan", offering a critically acclaimed turn as Wade, the medic who functions as the conscience of the group.

Continuing his big screen ascent, Ribisi teamed with Juliette Lewis to play a mentally challenged couple in "The Other Sister" and was tapped to play Pete Cochran in the big screen version of the 60s TV series "The Mod Squad" (both 1999). While those efforts failed to attract the attention of moviegoers or the acclaim of critics, Ribisi recovered with a lauded leading role in the 2000 drama "Boiler Room", playing a young ne'er-do-well who hits the big time as a broker for a fraudulent financial firm. He more-than-capably handled his character's ethical struggles and also served as the film's narrator, perfectly setting the mood with the quiet, matter-of-fact delivery he had previously employed to similar effect as the voice of the author in 1999's "The Virgin Suicides". 2000 also saw the actor take high-profile supporting turns, playing Nicolas Cage's brother in the forgettable actioner "Gone in 60 Seconds" and a young man seeking advice from a psychic (Cate Blanchett) in the more impressive thriller "The Gift". Ribisi returned to the small screen with a compelling turn as famed serial killer Gary Gilmore's journalist brother Mikal in the HBO original "Shot in the Heart" (2001).

After reteaming with Blanchett in German director Tom Tykwer's English-language debut "Heaven" (2002), Ribisi was next seen in the thriller "Basic" (2003), starring John Travolta and Samuel L. Jackson. Ribisi had a small but very entertaining role in director Sofia Coppola's meditative "Lost In Translation" (2003), playing Scarlett Johansson's energetic but very preoccupied photographer husband (a role rumored to be inspired by Coppola's then-real-life husband, director Spike Jonez). The actor also had an amusing turn in "Cold Mountain" (2003) as a backwoods hick who generosity with the food, moonshine and especially the women of his hillbilly clan may not be as benelvolent as it first appears.