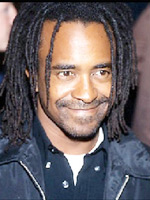 A veteran of Chicago's Second City comedy troupe, Michigan native Tim Meadows joined the cast of NBC's "Saturday Night Live" as a featured player in February 1991, earned regular star status in September of 1993 and stayed with the series through the beginnings of its 2000-2001 season, standing alongside such notables as the late Phil Hartman as one of the longest-running and most versatile regulars on the sketch comedy series. While on "SNL", Meadows impressed with humorous and accurate impersonations of celebrities including Michael Jackson, Joey Buttafuoco, Ike Turner, O.J. Simpson and General Colin Powell as well as memorable original characters Lionel Osborne, host of the mock public interest TV program "Perspectives", "Quiet Storm" radio DJ Chris 'Champagne' Garnet and his most popular portrayal, The Ladies' Man Leon Phelps, the Courvoisier-drinking romantic advisor with an odd take on relationships and an even odder way of speaking. Meadows had a magnetic presence and turned in dependably solid performances on the demanding series, losing his professional poker face only occasionally to let out a laugh at times when dealing with the amplified antics of fellow Second City alumnus Chris Farley, whose discovery by Lorne Michaels paved the way for Meadows' place on the show.

Several years after appearing in a string of films based on "Saturday Night Live" sketches including "Coneheads" and "Wayne's World 2" (both 1993), Meadows was offered his own chance at features, and the 2000 release "The Ladies' Man" gave the eponymous hero Leon Phelps the opportunity to bring his inane romantic advice to the big screen. That same year he left "SNL" to join NBC's primetime line-up as a regular cast member on "The Michael Richards Show". Here Meadows played a private detective trying to overcome his Peeping Tom tendencies, one of the workmates of P.I. Vic Nardozza (Richards).

Meadows' additional credits include a 1996 stint at the Kennedy Center as a featured performer in the Second City production "Truth, Justice, and the American Way". He was also featured in a 1999 episode of Comedy Central's odd series "Strangers With Candy" and lent his voice to the animated holiday special "Olive, the Other Reindeer" (Fox, 1999). A supporter of the Free Tibet movement, the actor-comedian was featured in PSAs for the organization that drew parallels between the present-day Tibetan struggle for civil rights and the similar African-American movement of the 1960s.